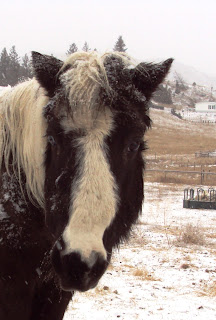 Our children's pony which has become the most important animal on our farm is Tickityboo. Tickyboo is a 20 something pony with chronic founder that suffers from cushings disease. In horses the elevated and un regulated levels of steroids wrecks  havoc on the horses body.  The body's inabiltiy to stop or slow steroid production leads to several side effects such as increased urination and water consumption, a decreased ability to regulate hair growth and body temperature.  in retrospect, she has been suffering for several years from this condition. Last winter the laminitis was very bad and we had box stall confined her in heavy bedding and padded her feet, we restricted her diet to low sugar foods, and gave her bute almost daily.
We started the treatment after blood tests and a realization that she had more than just laminitis.  She gets pergolide every day and a semi restricted diet. She has put in her best winter ever.  Paul has not yet come in and said she won't get up for breakfast, or my goodness (not his words!) what are we going to do.  My son still believes she is the fastest horse on the property so she is moving a bit, but not great. 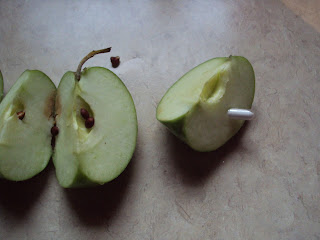 The biggest challenge this winter is sneaking the pergolide pill into her every day.  Last winter she would eat it in some beet pulp and senior feed, but this winter she got wise to that.  We now have to stab a hole in an apple and put the pill in whole.  She has managed to not rupture the capsule into her mouth so its been working for several months, hooray.  As a paranoid veterinarian my horses are evaluated critically everyday for what disaster next beholds them.  Thankfully the pergolide has been working and my list of things to worry about has been reduced.  Maybe with some further foot modifications she could be the fastest horse on the place, especially if the thoroughbreds are all of working or being bred. 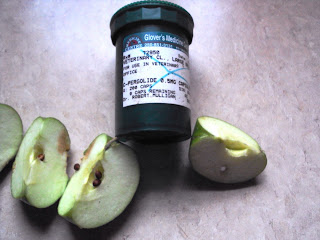 Jennifer
I am a western college of veterinary medicine grad from 1994.